PEOPLE & PLACES: Civic Center Plaza I won't miss it, will you?

Tulsa World columnist Michael Overall is waxing poetic and mourning the impending loss of what’s left of Tulsa’s Civic Center Plaza in this recent article, suggesting Tulsa wants “to toss it away like an empty soda can.”  Seriously?

I’ve laughed to myself over several of Michael’s urban planning observations the past few years, but this article really takes the cake.  He apparently has concluded that the completion of the Civic Center complex in 1969 fulfilled the then 50-year dream of a landmark municipal development that would forever reshape downtown Tulsa.

Those dreams, dating back to 1924, were based upon two previous failed proposals that would have created civic complexes with government buildings of classical and art deco architecture surrounded by formal gardens, art museums, reflecting ponds, and fountains; not the “uncluttered, wide-open plaza” surrounded by minimalist geometrically stark buildings that were actually built.

The Civic Center complex design was the brain-child of local architect Murray McCune.  McCune and architect Bob Jones collaborated on the project and according to Overall were reportedly influenced by Ludwig Mies van der Rohe, a pioneer of the “less is more” philosophy in architecture.

Without naming sources, Michael states the design won critical acclaim from around the world including a German publication which called it one of the “top architectural achievements in the world during the past century.” I’m glad the design won an award, but clearly the award did not come from those who have actually spent any time in the plaza over the years.  The civic center plaza as connective tissue and gathering-place has been a colossal failure since day one in my view. 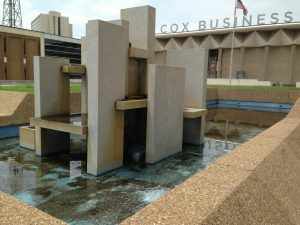 Show me a single photo of a thriving plaza filled with locals drawn to the space for anything other than to pay a water bill, court fine or stand in-line for jury duty.  Great “places” survive and thrive.  The Civic Center Plaza was never a great place and that is why it will not survive.  It is off-putting by its very stark nature, and not a place anyone but the homeless has ever sought to “hang-out.” If anything, it is the quintessential utilitarian design example of function over form, a hallmark of the aptly named Brutalist Architecture of the day.

Michael’s article presumably was inspired by the recent approval of the newly created Arena District Master Plan.  The plan aims to transform the district into a vibrant 18-hour neighborhood that will convert existing spaces into a series of signature parks and plazas and repurpose the outmoded civic center through a series of catalytic public-private development opportunities.

Astonishingly, Michael Overall compares this new plan to “the urban renewal projects that decimated downtown Tulsa in the 1960s and ’70s, when the city bulldozed several art deco masterpieces that people thought — at the time — were out of date and ugly and useless.”

In fact, those structures were bulldozed not by “the city,” but by for-profit real estate developers trying to make a buck.  The buildings were lost not because they were ugly, but because they were functionally obsolete and mostly empty.  And, at the time, we had no historic tax-credits or other incentives to help owners repurpose them.  Hundreds if not thousands of Tulsans often attended the demolitions of historic buildings to collectively sigh at the loss of what they considered to be architectural treasures.

While beauty is in the eye of the beholder, I doubt more than a handful of architectural community activists and preservationists will be on hand for the almost guaranteed eventual leveling of the Page Belcher Federal Building or Old City Hall (now the Aloft Hotel).  Conversely, massive new investments insure the old Assembly Center and Tulsa City-County Library, two iconic structures of the original design, will continue to serve and contribute to our community for generations to come.

The Arena District Master Plan holds great promise if it is effectively implemented.   Remember, it is not a regulatory document, nor is it a threat as Michael Overall opines; it’s simply a guide to future land use decisions that we should consider to improve downtown’s appeal and quality of life.  The only danger I see would be a lack of political will by elected officials to support the significant public investments needed to kickstart the plan’s hoped-for hundreds of millions of dollars in accompanying private development.

Let’s face it, the municipality of Tulsa has a dismal record of place-making, not for lack of planning but for lack of plan implementation.  We have many great places, but most of them were created by ambitious real estate developers or generous philanthropic interests; like our parks, trail systems, museums, and specialty shopping districts.

If we had the Arena District Master Plan 10 years ago, we could have saved $millions just on the Civic Center Plaza alone.  We likely would not have sold, for one million dollars, Old City Hall (now the Aloft Hotel), situated on a valuable parcel that arguably should have been preserved for convention center expansion.  And we likely would not have spent another five million to six million to temporarily support a driveway to the hotel by reinforcing the plaza deck to accommodate vehicular traffic that was never designed for it. By all accounts, the plaza, lacking in any kind of pedestrian amenities or human scale, remains in poor condition and in need of major repairs or complete replacement.  I wrote about the short-sighted decision here: PLAZA IMPROVEMENTS A MISSED OPPORTUNITY, back in 2014. 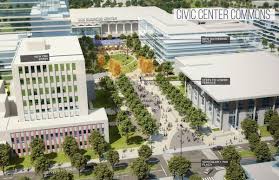 The Arena District Master Plan reimagines the existing plaza as a park-like Civic Center Commons, that could serve as a catalyst for future neighborhood development.  It would be a linchpin between the core of the Central Business District and the new front door to the Cox Business Center. It would essentially be the heart of the public realm, providing a vital connection to all new and existing public spaces with regular programming, pedestrian scale seating, lighting, plantings and shade.

Sorry, Michael Overall. I’m one Tulsan who will definitely not miss the Civic Center Plaza.