WHO GETS AND WHO GIVES a DAM? III Installment III - A pause is announced

This is the third in a series of Op/Ed columns titled Who Gets and Who Gives a Dam.

A pause is announced, to help citizens understand the ramifications of the Arkansas River Infrastructure Task Force’s proposal for a series of low-water dams costing $300 million. Please help get the word out and share this with your friends on social media.  The recent announcement that a vote on the low-water dam proposal may be pushed back is welcome news. I give credit to the Arkansas River Infrastructure Task Force and its Chair, G.T. Bynum for listening to the feedback offered at the town hall meetings and other venues. Obviously there are more questions than answers at this point and rushing the package to a vote this fall would have been premature. With a filing deadline in August there is not be enough time to address the concerns expressed regarding the environmental and economic implications of the plan before next spring.

A new Zinc Dam has broad support among Tulsans

With that said, there remains little question the rebuilding of the Zink dam appears to have overwhelming support from most Tulsans. Even the most zealous environmental activists seem supportive of the already proven value of the Zink dam and concede that is worn out, dangerous and needs to be replaced. With the required 404 permit in hand, work on the new Zink dam could begin almost immediately after funds are approved. With completion of A Gathering Place expected in late 2017 we should not delay providing public infrastructure to support this world-class new park.

Mixed reviews for the other dams

Except for Bixby residents, few seemed supportive of the Bixby dam. With virtually no benefit to the upstream communities it’s a wonder how it was ever included in the first place. Councilor Bynum made statements at two of the town hall meetings that Bixby residents might “come close” to paying for their dam. Based upon past sales tax revenue performance I doubt that would be the case, but if true, let them build and pay for their own dam if that is how they choose to spend their Vision 2025 extension funds.

As for the Sand Springs dam, there has not been enough convincing return on investment evidence offered at this point to justify its inclusion either. Yes, steady releases throughout the day from a newly created Sand Springs lake might be desirable if money were no object. But at $75 million plus, it would not appear to most that the benefits are worth the cost. Councilor Bynum has clearly stated that both the Zink Lake and the newly created south Tulsa/Jenks Lake will hold water without the benefit of a Sand Springs dam.

A Sand Spring’s dam and lake might be able to maintain slightly higher water levels between the lakes but it’s doubtful it would be sufficient to create the kind of ambiance required to spur speculative real estate development in those areas. Since it would not measurably affect the lake levels at Zink and south Tulsa/Jenks it should also be cut from the package.

The big question: Who pays and who benefits

I’m not suggesting we give up hope on the Sand Springs dam. Let’s not forget that in 2007, Senator Inhofe successfully got an authorization for $50 million in federal funding for the Tulsa County low-water dam projects included in the Water Resources Development Act. However, these projects need to get an appropriation before spending can move forward.

While an appropriation seems remote at least for the moment, it is still possible and we cite the Tulsa’s OKPOP Museum; once left for dead but recently approved for funding by the Oklahoma state legislature as an example. The Sand Springs Dam probably has the best chance for Federal funds because it provides the most environmental benefits.  By storing and releasing water, the Sand Springs dam would arguably improve downstream water quality.

Considering the good, the bad and the ugly of the Sand Springs dam, let’s also cut it from a vote in the near future and encourage the Oklahoma congressional delegation to keep a Federal appropriation of the Water Resource Act as a high priority.

The south Tulsa/Jenks dam looks to have much more support among Tulsans than either of the other two new proposed dams. Even so, there are plenty of sound arguments against it. First of course is the massively disproportionate amount of the costs borne by Tulsans in comparison to the projected benefits. With half of the newly created shoreline inside the Jenks city limits, and the Tulsa side requiring $ millions in new infrastructure to access and support it, the numbers don’t add up to a sensible public investment at this time. 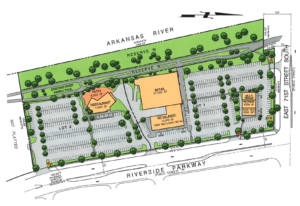 My biggest objection to the south Tulsa/Jenks dam revolves around the kind of development it might generate. Too little has been offered as to what that development might look like. I’m very concerned, like many others, that it would be nothing more than typical auto-centric suburban sprawl dominated by big box stores and acres of surface parking, ruining the natural beauty that many people appreciate as it is. The Arkansas River Infrastructure Task Force members seem naively determined to disregard decades of resistance to the over commercialization of the river. They need not look much further than Zink Lake which has inspired precious little development or redevelopments since it was built decades ago.

If it’s economically viable riverfront development we are seeking, a much more prudent use of the $ 70 million cost of the south Tulsa/Jenks dam, would be to spend it on land acquisition and green space development on the west bank around 21st Street. Previous requests for development proposals in that area have failed largely because the city has not offered to be a key financial partner, expecting private developers to take care of everything.

By acquiring the concrete plant and creating a beautifully landscaped open green space, much more attractive parcels with incredible views of downtown Tulsa could be offered to developers. It could also serve as phase one of a plan to relocate the public works facilities from 23rd and Jackson, allowing that site to be redeveloped as a mixed use village around a light rail transit hub as envisioned in the Downtown Tulsa Master Plan. It would only be fair to include significant funds to help with the revitalization of the nearby Eugene Field neighborhood and support their recently approved small area plan.

In closing, this Installment III of my series, I again compliment Councilor Bynum for wisely agreeing to a pause in the process. It will do two things.  First, it will allow for further analysis and review of the low-water dam proposal. Secondly and perhaps more importantly it will allow consideration of other projects worthy of consideration for an extension of Vision 2025 funds without the presumption that half of them are already spoken for.

Any way you slice it, commandeering half of the Vision 2025 funds for the four dams in a winner take all up or down vote would have seriously compromised what is left for other worthy quality of life enhancements. The public’s interest will be well served by broadening the discussion.  I’m excited to see some of the ideas put forward on Councilor Ewing’s project video challenge.