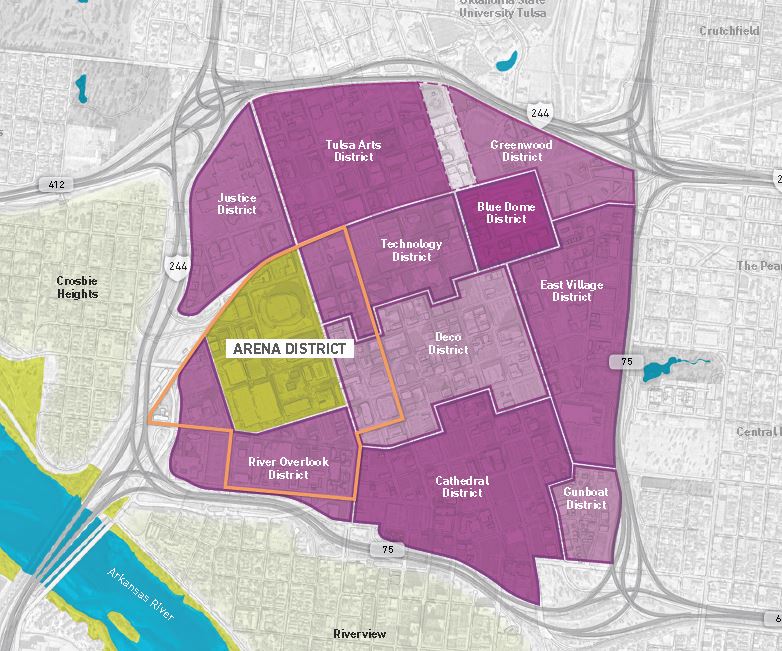 The spectacular BOK Center and the newly renovated Tulsa Convention Center anchor what has become known as the Arena District in downtown Tulsa.  The award winning state of the art sports and entertainment arena hosts major concerts, family shows and other world-class entertainment.  The iconic and modern architecture of the facility is the brainchild of world famous architect, Cesar Pelli.  The arena and the convention center were the primary focus of Tulsa’s Vision 2025 initiative, a broad-based effort to grow economic and community infrastructure for future generations.

The convention center received additional funding for new amenities in the 2016 Vision Tulsa.  The Cox Business Center and Arena District Master Plan were approved for $55,000,000 to expand the current convention center and create a master plan for the redevelopment and economic growth of the entire district, maximizing the potential of the BOK Center.

Arena District Master Plan Promises a Rebirth of the Area

As districts go, the Arena District lacks the kind of village atmosphere that you find in the Blue Dome and Arts Districts, but that will change dramatically in the coming years as the area matures and promising new developments come along as a result of the 2019 approval of an exciting new Arena District Master Plan.  Click here for Media Library 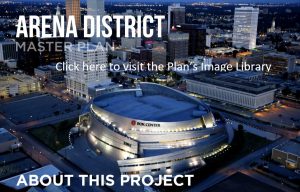 The Tulsa Arena District Master Plan is a 20-year vision to transform the Arena District into a dynamic downtown neighborhood by focusing public and private investment to leverage its signature attractions of the BOK Center, Cox Business Center, and City-County Library, which collectively attract over 1.8 million visitors a year.

It is expected that implementation of the Master Plan will create a world-class neighborhood, usher in a new era of downtown investment and growth and produce a district that represents the unique character of Tulsa with authentic destinations and experiences for residents and visitors.

The plan aims to transform the district into a vibrant 18-hour neighborhood and create a new front door to downtown that introduces and links visitors and residents to the attractions that Tulsa has to offer.  The vision contained in the Master Plan proposes a series of strategic public investments in building great downtown streets, transforming existing spaces into a series of signature parks and plazas, and repurposing the outmoded civic center through a series of catalytic public-private development opportunities.