Most homes in midtown were built before 1950, but there has been some new construction … particularly in the last 10 to 15 years.  Due to the high cost of building sites, most of this new construction has been in the higher price ranges, typically beginning at about $450,000 to $500,000 and going up to well over a million dollars.

These new homes appeal to those who appreciate the charm and character of the older, established historic Midtown Tulsa neighborhoods but want all the modern amenities and conveniences found in new construction.  For those who can afford it, these properties make exceptional homes.

A new group of developers discovered in the last few years there is also a demand for modern townhouses, lofts, and patio homes in Midtown Tulsa.  Many of these new homes feature open living areas, with a combination of beautiful hardwood, slate or stained concrete floors, stainless steel appliances, granite counter-tops, balconies, and some with dramatic views of downtown Tulsa.

Pockets of these new homes can be found throughout midtown but one of the most popular and largest concentrations is within easy walking distance of the many restaurants, shops and entertainment attractions in the Cherry Street District, located between 14th St and 15th St from Peoria Ave to Utica Ave.

Some of these townhomes offer a distinctively “Green” approach to new construction with state of the art urban architecture, including “Leed” Certified sustainable housing, with bamboo flooring, geo-thermal heating, rooftop gardens and low e-windows.  When shopping for one of these new midtown “loft-style” homes you can benefit by having an experienced and knowledgeable REALTOR represent you in your purchase.  There really are quite a few options to choose from and an experienced agent can help you evaluate which one best suits your preferences and lifestyle.

New Homes in historic Midtown inspire a bit of controversy 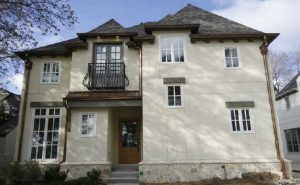 The trend towards so called “in-fill development” (which usually would be more properly described as “re-fill development) has created no small amount of controversy as some have insisted that the older neighborhoods are being ruined by insensitive developers who show no restraint and build homes that don’t fit the neighborhood in terms of size and scale.

Some years ago, a responsible group of citizens banded together in protest and created a website to call attention to their concerns.  Their work continues to this day and you can check out their site here:  Preserve Midtown.  Over the years, Preserve Midtown has proposed many new restrictions on new construction in midtown Tulsa, including new ordinances and even suggested establishing a moratorium on residential demolitions until so-called “conservation” districts are established.  We applaud and support their enthusiasm and zeal for protecting our treasured midtown Tulsa neighborhoods while we also recognize the need for appropriate “infill” and “refill” development.

The bottom line is this:  all the original midtown neighborhood subdivision covenants have long since expired and there is scarcely little left to protect existing neighborhoods from inappropriate new construction.  A lot of the new construction in midtown over the last few decades has added to the rea’s charm, but some of it has been less appealing if not downright out of character for the surrounding area. 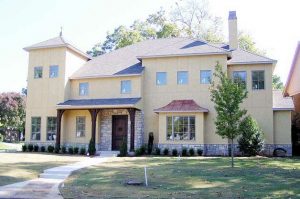 For the preservationist minded buyer there are options for protection in Tulsa’s Historic Preservation neighborhoods.  New construction in those areas is subject to a Certificate of Appropriateness and must conform to certain design standards.  But as of now, most of the rest of midtown has few restrictions on new construction beyond routine building codes with very little in the way of design guidelines.  For more information on Tulsa’s historic neighborhood assets visit the Tulsa Preservation Commission.

These days you seldom here much about the age old real estate hypothesis that in a free society a piece of land will almost surely seek its highest and best use.

This Sunset Terrace home was deemed inappropriate by some when it was built, but objections seem to have faded as the landscaping matured.

The strong, healthy and well-maintained properties typically survive, and the dysfunctional and neglected properties often make way for new growth, which if done appropriately, can add real value to the neighborhood.

So you have the “neighborhood advocates” on the one hand who argue that the fabric, character, and beauty of one of Tulsa’s greatest resources – midtown neighborhoods – are being eroded, and claim that the teardown / McMansion craze is destroying cultural and social diversity in Midtown by demolishing affordable middle class and even upper middle class homes in favor of McMansions that only the rich and near rich can afford.

On the other side you have many home buyers, builders and developers who claim that unnecessary restrictions in the way of new building codes, ordinances, laws and enforcement would set a dangerous precedent and impede commerce and unjustifiably hinder a homeowner’s rights.

Some opponents say “Be careful what you wish for”

Some in opposition to the proposed new limitations say that property owners, working within the framework of the existing building and zoning codes and covenants should have the final say on what is built upon their property.  They go on to imply that any infringement or restriction upon their property rights should be carefully weighed and applied only when necessary to truly protect the public at large.

It is probably safe to say there are valid arguments to support the concerns of both sides and a healthy dialogue among reasonable people will serve us well.  The so called “bundle of rights” accompanying the ownership of real property has always been among our most valued and treasured rights as citizens of the United States.

The challenge we face is how to balance our democratic freedoms, our right to own real property and use it as we wish and still protect our neighbor’s rights as well?

Why do communities need “infill” and refill” development?

Communities rely on ad valorem taxes to finance public schools, health and social services, county roads, law enforcement, libraries, and many other services, so maintaining a healthy tax base is important.  Without the prospects for new growth, it is easy to see how a neighborhood might easily fall into decline, as some historic neighborhoods arguably have.

Look what happened in the late 50’s and 60’s when there was very scarce new construction in midtown and families joined a mass exodus to new homes being built in south Tulsa and the suburbs.  Many of our most prized midtown neighborhoods fell into deep decline that lasted close to 25 years before people started moving back and renovating homes which helped inspire and give confidence to developers who began to once again invest in midtown.  While we benefit from protecting the character of our historic neighborhoods we must be careful to not discourage new construction which can contribute to that tax base.

Hopefully a sensible compromise will be achieved

We applaud individuals and groups who stay involved and work to protect the interests of their neighborhoods.  Watchdog groups can be very effective keeping people informed of the issues and land use decisions which impact them.  We would respectfully request that everyone debate these issues without resorting to rhetoric, finger pointing and name calling that leads to further divisiveness and engage in a constructive and meaningful dialogue that will serve us all well.

Updated Comprehensive Plan …the framework for a new approach

In July of 2010 the Tulsa Metropolitan Area Planning Commission adopted and the City Council subsequently approved a new Comprehensive Plan after a massive planning effort called PlaniTulsa.  Literally thousands of Tulsans participated in planning process and one observation became crystal clear… citizens want to have a say in what their neighborhoods and commercial districts look like in the future.

While the plan is now public policy it has only recently begun to be implements once the zoning code has been updated in 2016, a process that took several years more than anticipated. We are hopeful that both development and neighborhood interests will work together to achieve the vision and goals of the new plan.