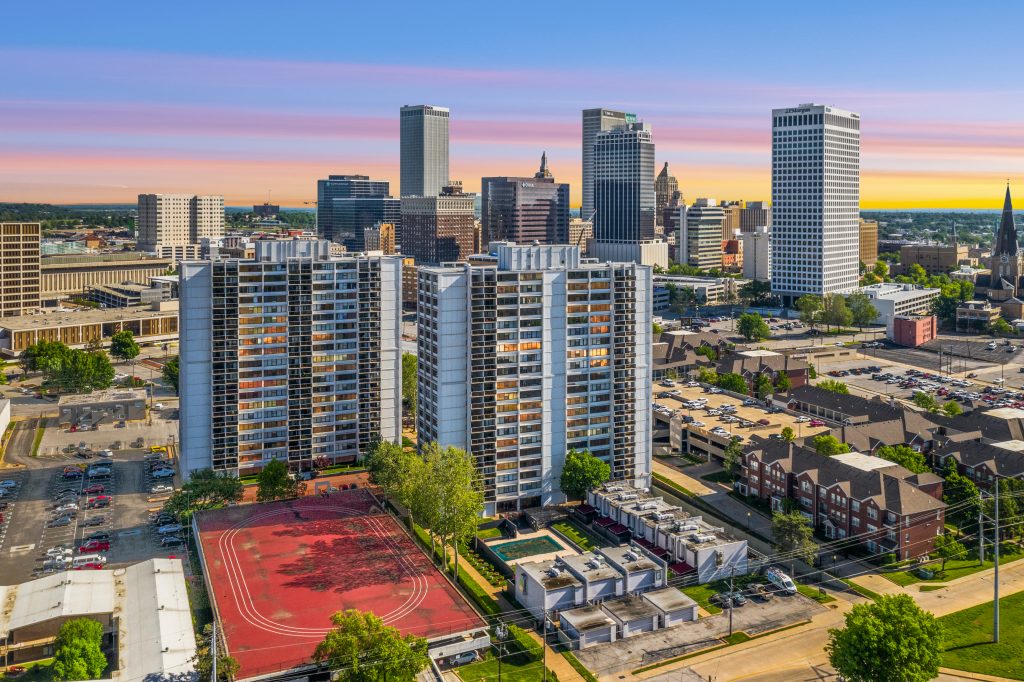 This is by far the most dramatic two-year increase in the history of Central Park, and an encouraging sign that the community is poised for even more impressive growth in the future.

A number of national and global conditions contributed favorably to this recent recovery and growth of home values at Central Park, including the enormous impact the Covid-19 Pandemic has had on housing and real estate values nationwide; as well as the increasing demand for an urban lifestyle in cities from coast to coast.

Locally, the decade long momentum gained from hundreds of millions of dollars in public and private investments in downtown Tulsa has had a major impact on all real estate inside the IDL.  But perhaps the most important factor has been the rather modest investments made by the CPOA in landscaping, painting, and common area improvements over the last few years.

Disclosure: The sales statistics cited below are based upon an analysis of 488 closed MLS transactions at Central Park between March 27, 1998 and December 31, 2021.  Closed transactions involving REALTORS are typically considered “arms-length transactions.” As such they arguably reflect true market values more so than deed transfers between a husband and wife and their family trust or from one family member to another. If all Central Park transactions were figured in, including those sold by owner, the numbers would likely look a bit different.

Helpful Hint:  For easier viewing you can open a full-size workbook of the data and tables by clicking the small icon at the far-right side of the grey bar at the bottom of the table.  Desktop or large screen monitor is highly recommended.

Real estate market prices are driven by supply and demand.  For many years prior to 2016, the supply of listings at Central Park far exceeded the demand.  It was not unusual for there to be 12 to 15 Central Park listings at any one time.  In the 10-year period before 2016, the average number of closed MLS sales was 17 per year.  The low demand resulted in suppressed values that did not keep pace with the appreciation enjoyed by the rest of the market, and it also contributed to days-on-market times that far exceeded the general market.

There were many factors that contributed to the poor sales performance of Central Park units prior to 2016, but the CPOA’s failure to invest in and properly maintain the mechanical systems and common areas was arguably at the top of the list.  Renovated and well-maintained units struggled to recover their investments in improvements that were being adversely impacted by obvious neglect around the campus and in the structures. Click here Historical Overview for more insights and background on home values at Central Park.

Around 2016, the CPOA earnestly began modest improvements to common areas and systems which have been on-going since them.  The attraction of new, more enlightened members to Central Park’s governing body has also been a positive development.

The association’s direction began to take a new path, increasingly free of the rancorous behavior of some who had divided the community by constantly criticizing decisions but failing to offer any meaningful solutions.

Recent boards have bravely accepted the extraordinary challenges of trying to address decades of disinvestment and neglect.  That commitment has led to the growing sense of optimism among owners and prospective owners that the future of Central Park is bright indeed.  It also resulted in a record number of recent sales including 39 MLS closings per year in both 2020 and 2021.

The Increases Could Potentially Have Been Higher

As stated, the increased sales activity over recent years has been greatly impacted by investors and other non-resident owners eager to sell units in the rapidly improving market.  Unfortunately, a number of them, so desperate to sell after many previous disappointments, undervalued their properties by listing them at prices below even what real estate agents were recommending.  Otherwise, the impressive gains in values might have been higher, perhaps even much higher.  It also should be noted that many of those properties had been rentals with limited renovations or improvements since they were purchased.

So, What’s Next, Where Do We Go From Here

The impressive number of sales at Central Park over the past two years was heavily influenced by non-resident and investment owners who had waited patiently for the market to improve.  It appears that that flurry of activity reached its peak in late 2021.  Since then, the inventory of active listings has shrunk considerably, averaging only one to three listings at any particular time.

There will be several keys to sustaining the current momentum and continuing to improve the average sales prices of units at Central Park.  Even the most sophisticated seller can benefit by working with skilled agents who are familiar Central Park’s vision, potential and all that is has to offer.

The most crucial aspect of any marketing strategy at Central Park is proper staging of the unit, preferably by staging professionals.

It works, EVERY time!  Consult with your agent about what repairs or improvements are essential, what would help, and how best to present your space, using what you already have to its maximum benefit and possibly bringing in a few temporary pieces of furniture or accessories to help.

Of equal importance will be the associations’ continuation of improvements to the common areas.  That includes the lobbies, the exercise facility, the game and meeting rooms, and the elevator cabs.  It also includes the completion of the 7-Year landscaping plan, the painting of all exterior surfaces not recently painted, and the long overdue replacement of all paving surfaces on the property.

By focusing successfully on those two key marketing elements, average one-bedroom sales prices will likely be in the $90,000 range before you know it.