Completed in 1914, the historic Brady Theater was originally designed as a municipal auditorium and convention hall.  Over the years, The Brady has hosted some of the greatest stars of stage, screen and television. 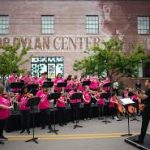 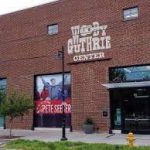 The Woody Guthrie Center is a public museum and archive located in Tulsa, Oklahoma that is dedicated to the life and legacy of American folk musician and singer-songwriter Woody Guthrie. Built in 1924, historic Cain’s Ballroom is considered by many artists as one of the top performance venues in the world. The ballroom was especially significant for popularizing music called western swing. Completed in 1964, the Tulsa Convention Center recently underwent massive renovations and additions which have transformed the campus facilities into a state of the art convention. The Oklahoma Jazz Hall of Fame was created by the Oklahoma Legislature in 1988 and relocated a few years ago into what was formerly the Tulsa Union Depot.  The historic building was entirely renovated. The Tulsa Performing Arts Center was designed by Minoru Yamasaki, who also designed the former World Trade Center in NYC.  It house four theaters, a studio space, and a large reception hall. Tulsa Ballet, founded in 1956, performs at the PAC.  The artistic mission of the Company has remained constant throughout the years. Under the leadership of Artistic Director Marcello Angelini, Tulsa Ballet has brought unprecedented recognition to Tulsa. The spirit, drive and fierce sense of pride of those who made Tulsa boom into an important city rich in commerce and industry also encouraged and sustained a rich cultural heritage, leading to the formation of the Tulsa Opera., the 18th oldest opera company in North America. Founded in 2005, the unique concept of the Tulsa Symphony Orchestra has gained national attention as a number of other professional orchestras search for a practical alternative to the traditional structure.  The foundation of TSO is an innovative business model for orchestral governance. The Tulsa Oratorio Chorus, organized in 1992, is comprised of very talented, dedicated, volunteer musicians, with a roster currently exceeding well over 100 members, who have joined together to share their love of great choral music and the art of its performance. Since 1922, Theatre Tulsa has been a part of the culture of Tulsa.  Theatre Tulsa and its supporters share a rich legacy of bringing music, laughter, and drama to the people of Tula and providing a venue for the many talents of the Tulsa performing arts community. In the late 1970’s, ATC became the only nationally recognized resident professional theatre in Oklahoma.  After 39 seasons of offering shows ranging from Hamlet to Rocky Horror, Bye, Bye Birdie to The Boys in the Band, and Romeo and Juliet.