The Center Plaza Apartments enjoyed early success but after twenty-five years of neglect and disinvestment, the project lost its luster and no longer enjoyed a favorable reputation.  It was ripe for redevelopment and in 1995 and 1996 a Florida real estate development company purchased the property and converted it to condominiums under the name CRESCENT HEIGHTS OF OKLAHOMA, INC, a real estate company with headquarters in Miami.

The company had a national background in condominium conversions and was at the forefront of the conversion boom in Miami Beach in the 1980s.  Believing Tulsa was a “micro-version of Miami” on the verge of a great downtown revival, they invested over $8 million on the remodeling of lobbies for a “more cosmopolitan feel” and other public areas, including new lighted tennis and basketball courts, outdoor swimming pool, jogging path, landscaping and parking.

Attendees always seemed impressed at what they saw –  the chic urban feel, fantastic views and amenities, but sales were slow, very slow.  According to reports, only about 15 percent of the existing rental units converted to condominiums.  After about 18 months it became clear that the anticipated demand had been grossly exaggerated and based upon faulty data.  There was no real demand for downtown condominiums at that time, as downtown was virtually deserted after dark.  Click the links below for more historical information on Central Park:

Throw Back Thursday – My First Sale in Real Estate It was a bittersweet experience
December 29, 2022
Subscribe to Central Park’s Unofficial Digital Newsletter 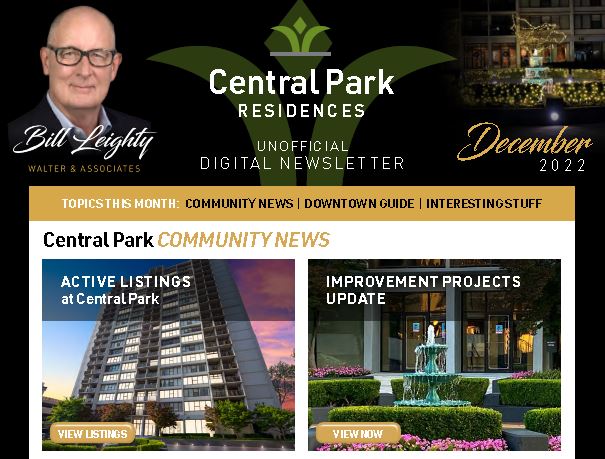