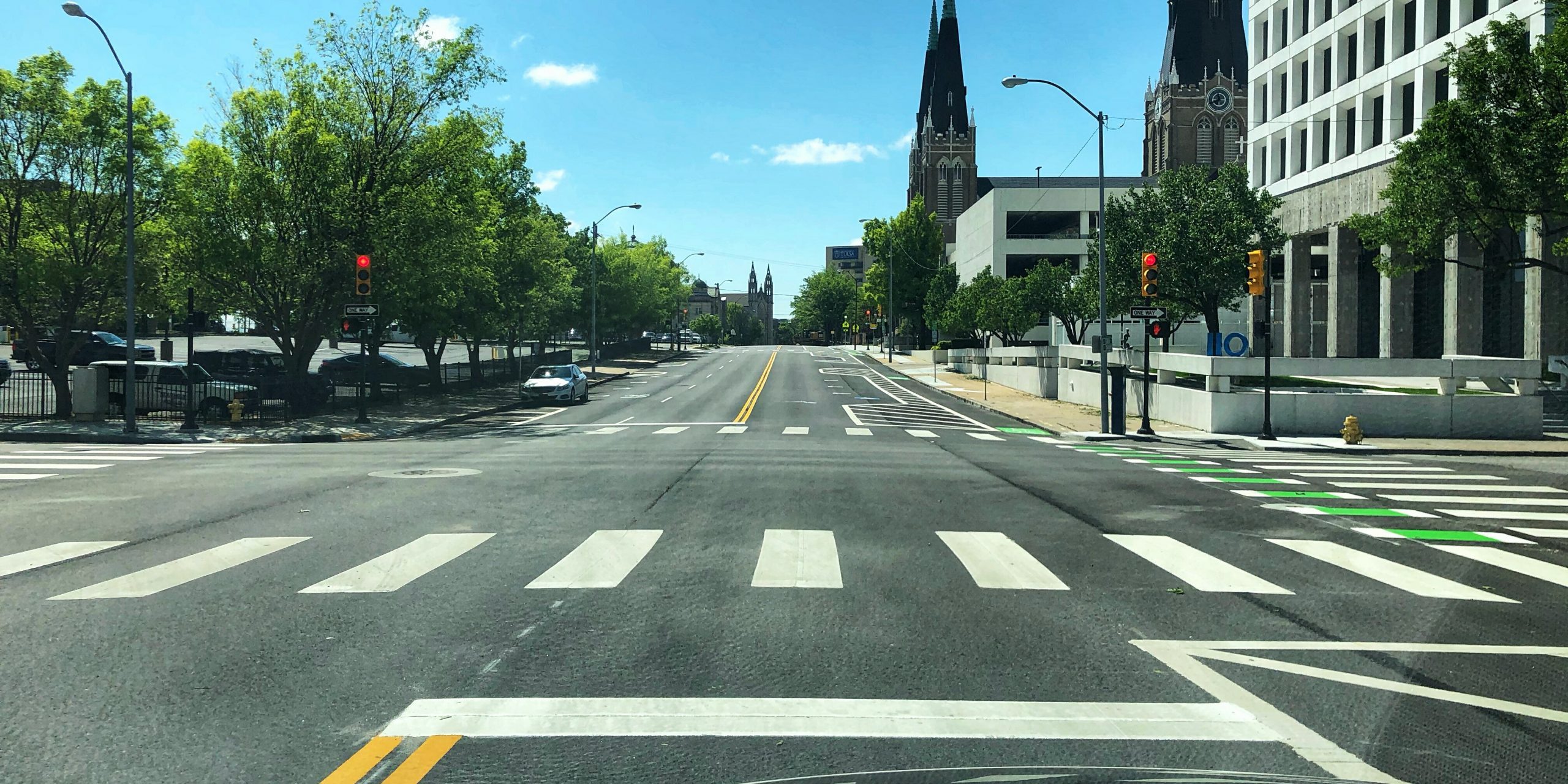 The recent street rehabilitation of Boulder Avenue in downtown is now complete. After enduring more than 12 months of noise, dust, orange cones and construction equipment, all lanes of South Boulder Avenue are now open to two-way traffic, having been converted from northbound one-way traffic.

It gives Central Park Residences, at 410 W. 7th St a glimpse into what the highly anticipated and just begun 6th Street and 7th Street improvements will look like when finished. The $4.4 million project was funded by the 2014 Improve Our Tulsa (third penny) sales tax. Boulder Avenue now has two northbound lanes, and one southbound lane with an adjoining and protected bike lane.

The conversion to two-way traffic has been in the planning stages since 1997 after a traffic study revealed the need for improved access to parking facilities downtown. But the project was much more complicated that re-striping and changing the signalization.

Water lines were replaced, and a bike lane was added on the west side. City of Tulsa engineering staff worked with utilities and communications companies to complete scheduled maintenance and repairs underneath the pavement to avoid tearing up the finished street in the near future. To the extent possible, pretty much everything underground is now new.

The improvements make Boulder Avenue much more pedestrian and bike friendly and with the addition of new handicap ramps throughout the nine-block area it is also ADA compliant. The narrowing to one southbound lane is considered a traffic-calming measure for the increased safety of pedestrians and cyclists.

The complexity of projects like the one on Boulder Avenue cannot be overstated. It is hard to imagine how many folks contributed to the successful conclusion of this massive street rehabilitation planning and implementation process. From the initial traffic study to the final striping, many hundreds of people collaborated and contributed to achieving the positive outcome.

The professionals from the Engineering Services Transportation Design team consulted with a wide variety of stakeholder groups and individuals, often with competing interests that do not align with each other. They were challenged to ensure the final design is not only consistent with the city’s adopted plans but that also fairly and equitably balance the needs of retail businesses, office tenants, pedestrians, cyclists, motorists, and physically challenged individuals.

Hats off to Paul Zachary, Director, Henry Som de Cerff, Engineering Manager, Doug Helt, Lead Engineer and Glen Sams, Project Manager and Senior Engineer in Transportation Design for a job well-done. Many other groups and individuals contributed by advocating over the years for the acceleration of a more balanced multimodal transportation model that better serves the needs of all users.  So, another shout-out is in order to the Transportation Advisory Board, the Bicycle Pedestrian Advisory Committee, Smart Growth Tulsa, TYPROS, the Downtown Coordinating Council,  and Nick Doctor from the Mayor’s Office.

To be clear, compromises were required and naturally not every group got everything they hoped for. But the end product is arguably a major win for good design and implementation that has set a high bar for future downtown street improvement projects. And in about 12 months, residents of Central Park will find a similarly well executed improvement at their doorstep on 7th Street. Yahoo!