Resident Profile – Hannibal B. Johnson A resident since 1984 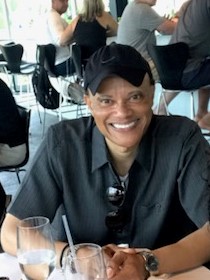 He flies mostly under the radar at Central Park, but Hannibal B. Johnson is one of the community’s most distinguished residents.  He is also one of its earliest residents, having moved into his unit in what was then the Center Plaza Apartments back in 1984.  Johnson was also among the first to purchase a Central Park Condominium after its transition from apartments in the late 90s.

A Harvard Law School graduate, Johnson is an attorney, author, consultant, college professor and highly respected authority on the 1921 Tulsa Race Massacre.  Having published numerous books and articles he is perhaps best known for “Black Wall Street: From Riot to Renaissance in Tulsa’s Historic Greenwood District.” First released in 1998, the book sparked a community wide discussion about an event that many Tulsans knew little about.

That discussion continues to this day as Johnson serves as a member of the 1921 Tulsa Race Massacre Centennial Commission, where he chairs the Education Committee.  He has written extensively about diversity, equity, and inclusion issues, and lectured widely on the history of the Greenwood District and the race massacre, during which much of the prosperous district was destroyed.

Hannibal Johnson has a notable record of community service, having served as both Chair and President of The Rotary Club of Tulsa.  He is also a past president of Leadership Tulsa, the Metropolitan Tulsa Urban League, and the Northeast Oklahoma Black Lawyers Association.  He Chaired the board of The Community Leadership Association, was a founding director of the Oklahoma Appleseed Center for Law and Justice and is past chairman of the board of the Oklahoma Department of Libraries.

While boldly confronting racial trauma resulting from decades if not centuries of socio-economic disparities and injustice, Johnson remains an optimist while pursuing full equality and equity. That is why he is sought after nationally as one of the nation’s leading authorities on diversity, equity, and inclusion issues and in improving race relations.

Hannibal Johnson has described that subliminal racial trauma as a festering wound, bereft of open hostility, but overflowing with suspicion and distrust traceable back to the history of the 1921 Race Massacre.  His latest book “Black Wall Street 100: An American City Grapples with Its Historical Racial Trauma,” chronicles what has changed and what has not changed in the century since the massacre.

I have known and admired Hannibal Johnson for several years.  While he appears amazingly comfortable lecturing before hundreds, I find him shy and protective of his privacy.  He has stated plainly that diversity, equity, and inclusion are his vehicle for engaging with people.  And he maintains that the concepts are far more than a social justice or “feel-good thing”, but also a business imperative required to build a strong workforce given the demographic trends in today’s world.

There have been a ton of articles written about Hannibal, including this fine piece by Emily Ramsey, another distinguished resident of Central Park, a Contributing Editor of the GTR MEDIA GROUP and the Greater Tulsa Reporter. And, you can find out even more about your distinguished neighbor and order his books by visiting  Hannibal’s website here: https://www.hannibalbjohnson.com

On his reasons for purchasing and maintaining a home at Central Park, Hannibal had this to offer:

“I love the feeling of downtown living. At Central Park, we are proximate to much of what is great about Tulsa: RiverParks, Gathering Place, fine dining, the arts, rich history, nice accommodations for our out-of-town guests, and so much more. Plus, it ’s a diverse, safe community where everyone feels welcome and included. I’m still all in, after all these years.”